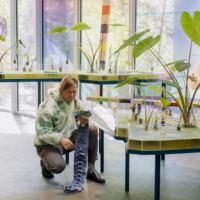 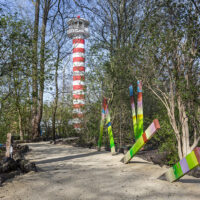 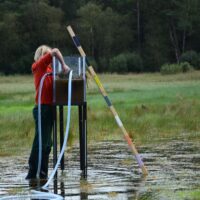 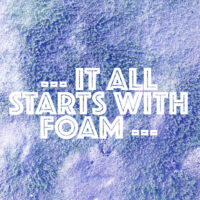 Training sessions at the Brienenoord island 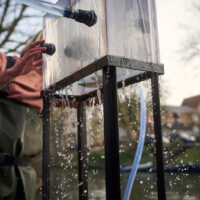 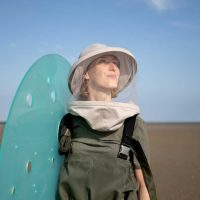 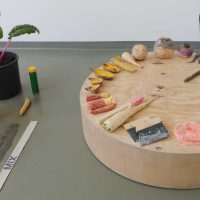 SWIET – SWIT is the Frisian edition of the long term research project SWEET – SWEAT and brought de Onkruidenier to landscapes in Friesland around Leeuwarden and Beetsterzwaag. For this floating work de Onkruidenier specifically zoomed in on the polder of Skrins, a meadow bird area located in a reclaimed channel of the medieval Middelzee estuary. The special occasion for this work was Arcadia, a 100 day triennial during which you could visit artworks throughout the entire Friesland area, all of which focus on the local landscape. De Onkruidenier had the pleasure of creating an installation for the Fries museum’s entrance.

SWIET – SWIT is a discussion piece where we explore how we can adapt to the changing landscape and climate. What are we going to eat? Can we adapt ourselves just like plants? The foil we installed on the museum’s windows filters specific colors on the light spectrum that support plants to grow. The work conjures up all kinds of speculative ways of measuring for us to question the controlling human behavior directed at the landscape here in the Netherlands.

Over a 100 day period, white pineapple strawberries, black rice, salt-loving potatoes, taro plants and all kinds of duckweed grew in our installation while we took care of this new ecosystem together with the Fries Museum’s staff. Part of the installation was a public programme consisting of three events where we internalized these new landscape imaginations by activating our taste buds, wandered around Beetsterzwaag and looked into the aquatic history of Leeuwarden.

SWIET – SWIT is a collaboration between Fries Museum, Kunsthuis SYB and de Onkruidenier.
The project was made possible by Arcadia and Mondriaan Fonds.
With special thanks to Josine Sibum Siderius, Laura Kneebone, Rebekka Bank 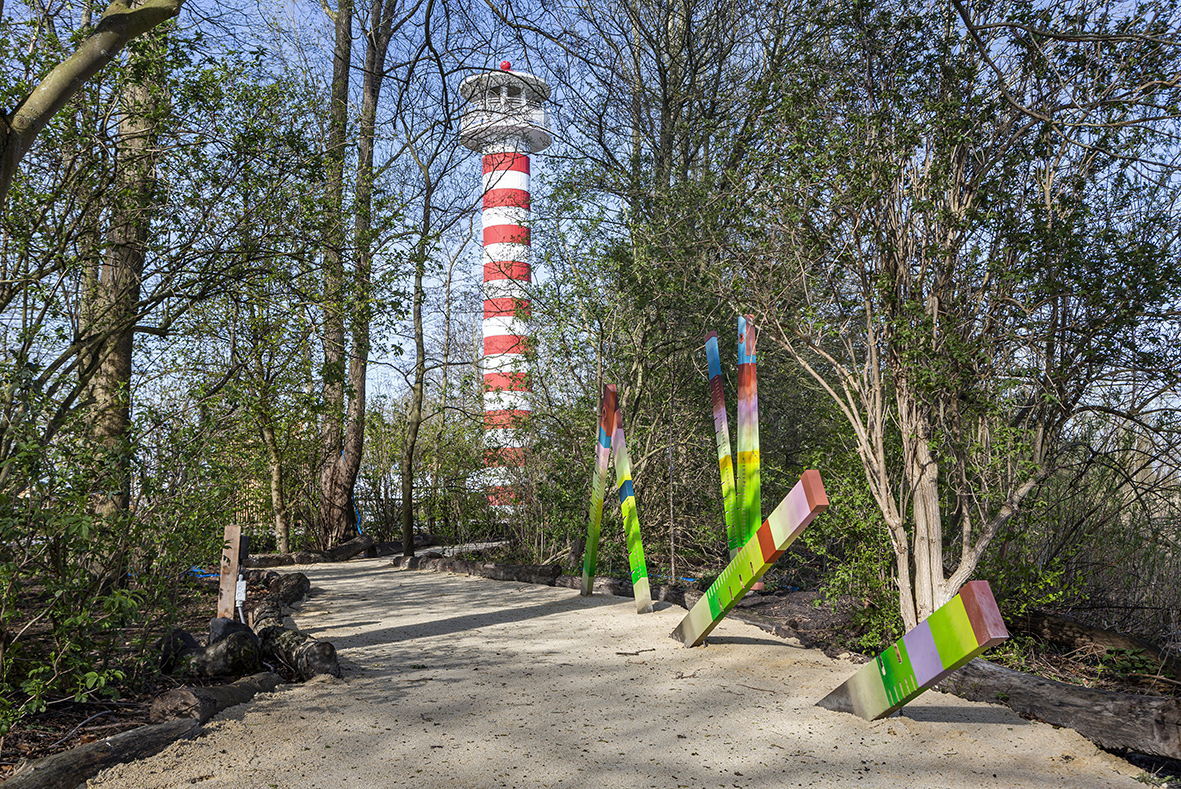 In the soil of the Floriade grounds, countless microorganisms live in a different reality: a salty phantom sea. The microorganisms, also called diatoms, think they still live in the Zuiderzee, while this area has been closed off from the Wadden Sea for 90 years.

In the work Mare Memoria, de Onkruidenier takes the audience into the world of these organisms and collectively depicts the hidden presence of the sea. With a site-specific new work, the artists also question the way we in the Netherlands continuously control the water by controlling and measuring the water level. How do we actually relate to the way we constantly refer to the NAP, how we use words, letters and numbers to interpret the world around us in a language with which we think we can fathom nature? In contrast, they propose an alternative perspective. Can smell, color and different materialities support us to experience our living environment in a sensory way? Can our bodies again serve as a measuring stick in how we relate to the landscape?

In the artistic research, de Onkruidenier became interested in the dynamics of smell. A smell that is difficult to describe, but very recognizable, is the smell of the sea. This smell now appears to play an important role in mitigating the effects of climate change. Scientists have discovered that “the smell of the sea” is caused by a tiny organism that is so abundant that it has a significant effect on the planet’s climate through the large amounts of sulfur gases they produce. One of those gases, dimethyl sulfide or DMS, we recognize as the smell of the sea.

We spoke to scent artist Frank Bloem, who took us through his research on the role of scent in our environment. He told us that the smell of sulfur is not only connected to the sea, but also to Brussels sprouts or rose petals. The cabbage family has its origins on the coast. A common ancestor grows there: the sea cabbage. Perhaps cabbages still carry the sulfur compound as a salty memory. But sulfur is also important in gypsum or lime compounds found in the walls of our homes, as well as in the shells of marine organisms.

In the research, de Onkruidenier also came into contact with a scientist who has been looking at silt for years. Bentish ecologist Harm van der Geest describes the feeling in which the microorganisms find themselves as in a jar of hair gel; enclosed by extremely large hydrogen molecules, much larger than themselves. De Onkruidenier depicts this reality through scented gels that activate the phantom sea through scents that we put together in collaboration with Frank Bloem.

Moreover, with the installation Mare Memoria, de Onkruidenier shows various elements connected to this sweet and salty ecosystem. In a world where sea levels are rising and the soil is sinking beneath our feet, de Onkruidenier questions how we as humans can relate to this. Can we learn to adapt to the changing landscape rather than the other way around? Can we, like those microorganisms, generate a salty memory in our bodies? Mare Memoria activates the salty memory of the organisms in the sludge and thus speculates on future scenarios for humans.

The installation of various rulers creates the suggestion of a measurable and controllable landscape. Like a folding rule, the work zigzags through Utopia. It is likewise reminiscent of the different heights of waves that come ashore and break off on the coastline. The rulers themselves incorporate a variety of colors and objects. It makes visual which parts, smells and forms are part of the SWEET – SWEAT ecosystem, forming a visual series of associations and narratives. What can we find the sea in? 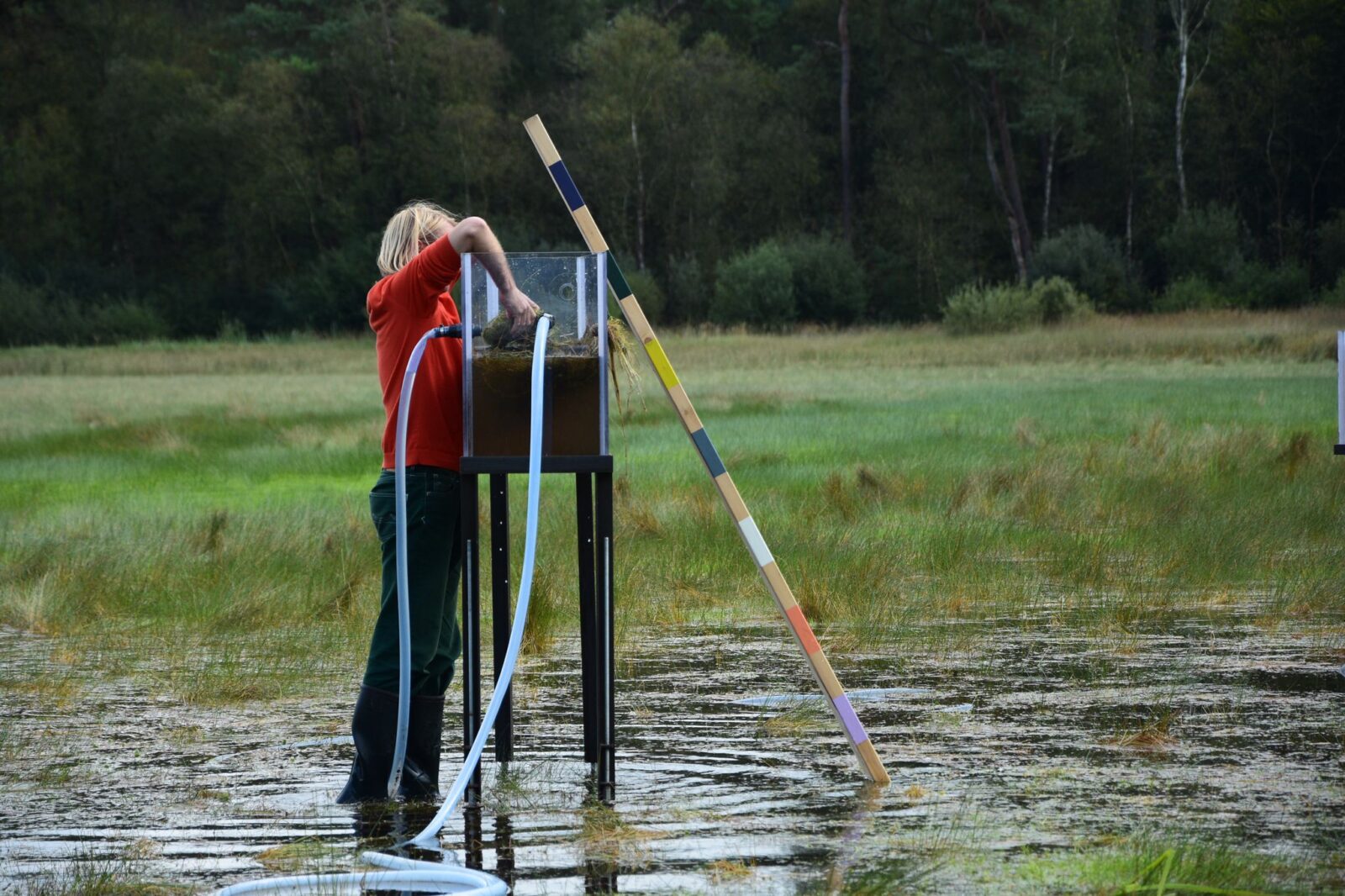 During LANGSTME, the triennial of Kunsthuis SYB, De Onkruidenier organized a site-specific training session called SWEET – SWAT – SWEETIE – SWEATER – SWETSEN. This training took place at the magisterial White Lake of Beetsterzwaag. Using a performative installation, the toponyms of the local landscape were examined. In what ways are names, language, our bodies and the landscape intertwined? And how can we unravel these different layers of the landscape by activating our senses in new ways? Together with the audience, a number of different exercises were done to look for both new sensory experiences and alternative relationships between body, landscape and language. Using a number of tools, including the new CryptoFoam developed in collaboration with Kai Udema, De Onkruidenier activated the changing dynamics between ourselves and our environment.

Training sessions at the Brienenoord island 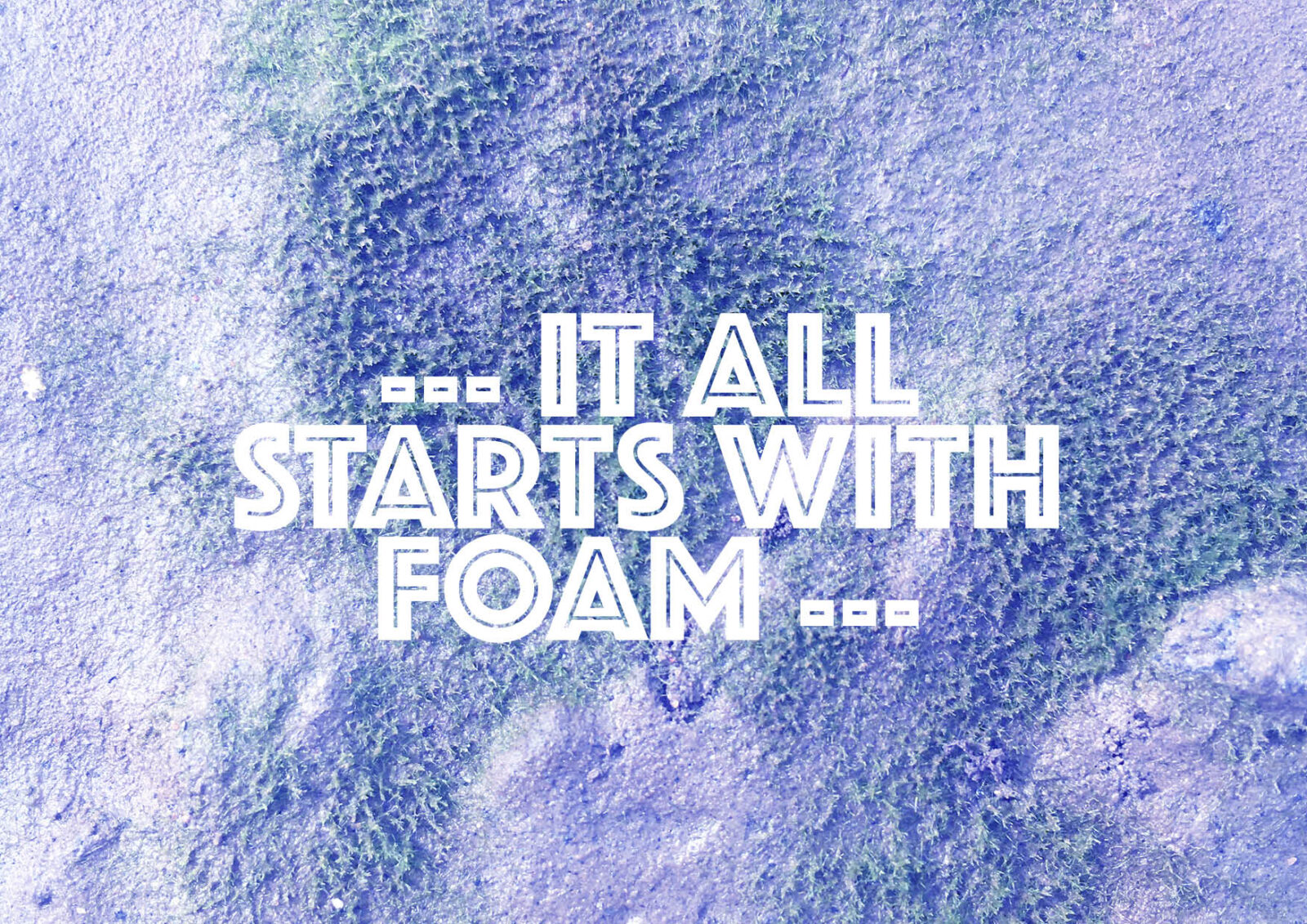 How do we experience the landscape when we leave behind the pace of economic times and begin to adapt to the rhythm of ebb and flow? What do we see, feel, taste and experience in harmony with the plants and organisms in the marine ecosystem?

Between March and May, de Onkruidenier spent several intensive periods – DEEP DIVES – on Brienenoord Island to explore new perspectives and training techniques for the evolution of salt-loving humans.

During their research period at the Buitenplaats, they saw the island change, the water rise and fall with the tides, and most importantly, they encountered themselves. How adaptable are we as humans really in the land between ebb and flow? How does our own experience of water change when we experience it physically and, in our wading suits, literally feel the water rising and can no longer reach each other? The Weedman became fascinated with the continuous transformation of the island. It shows and feels different every time.

On May 15, de Onkruidenier gave a presentation through 4 training sessions to let go of the ‘land and water thinking’. 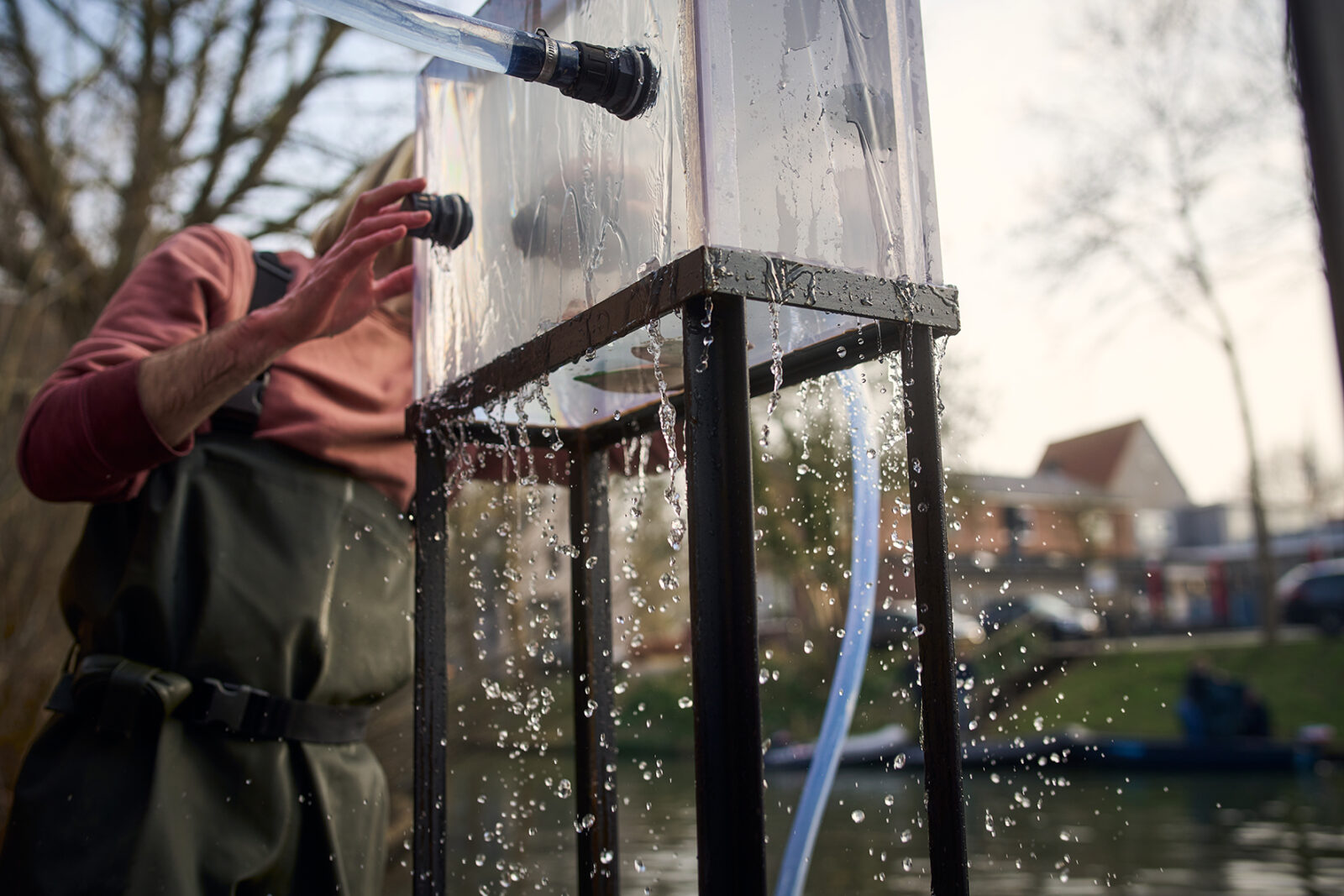 At the beginning of this year, at the invitation of Museum IJsselstein, de Onkruidenier started an eight-month research project into the traces of the sea. Since the middle of the 19th century the influence of ebb and flow has hardly been felt in IJsselstein. The painting of De IJsselpoort of the city of IJsselstein, as seen from the barony of IJsselstein by the artist Jan Weissenbruch (1822-1880) previously provided us with fine inspiration. The research has led to a new work the Peilwachter which has been installed on the Bolwerk, an outdoor location opposite the museum. The work can be seen as part of the exhibition on empathy: ‘No man is an island.’ with several works spread across IJsselstein. 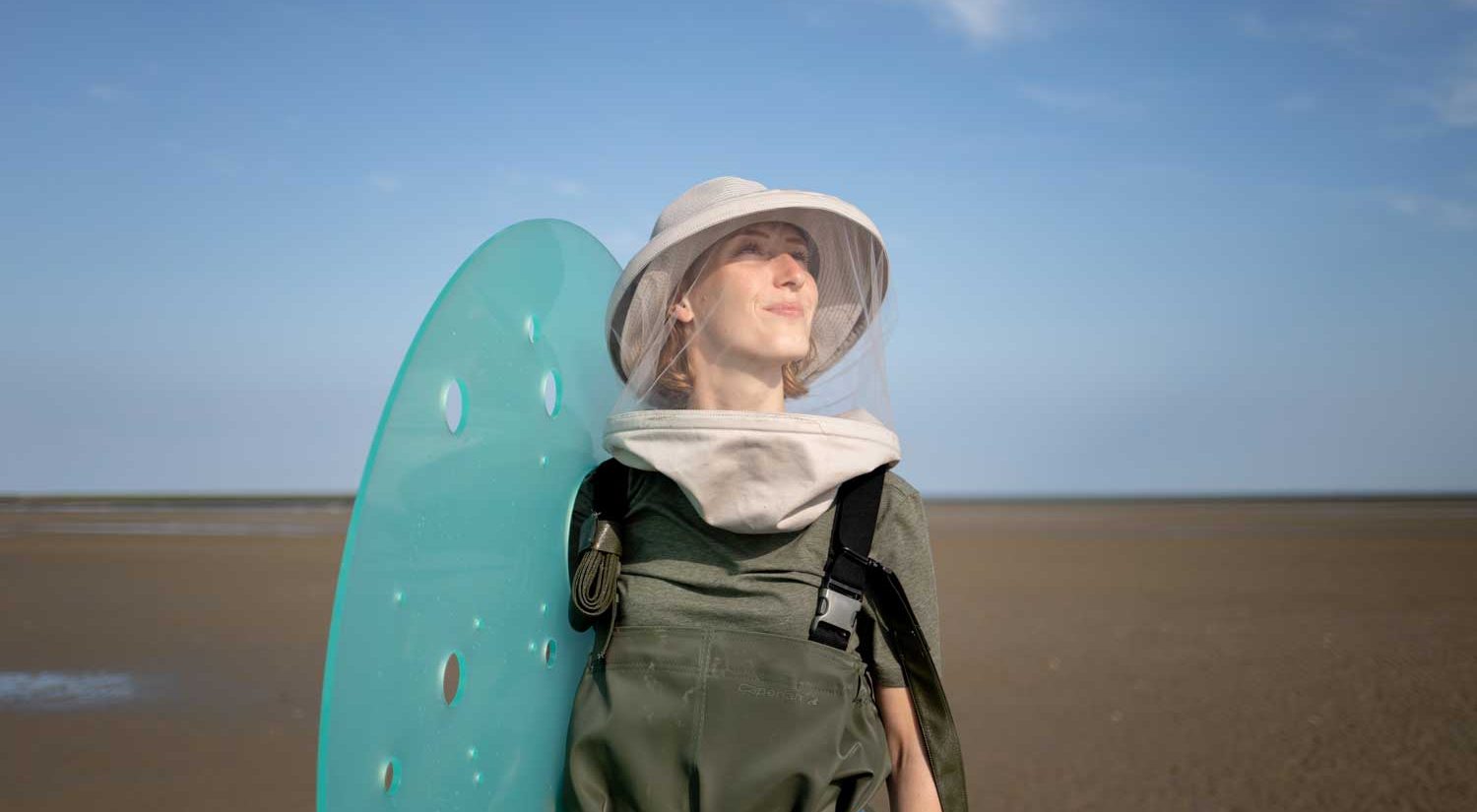 A saline climate is a realistic situation for the Netherlands. As human beings we adapt the landscape to our wishes and needs, without moving with the developments of our natural environment. Along the coast we find many salt-loving plant species (halophytes) that have adapted evolutionarily to survive in extreme conditions. What can we as humans learn from plants that have been adaptive to a changing environment over the centuries?

In the test zone SWEET – SWEAT, de Onkruidenier experiences nine days of living with the sea. The zone between the tides is their new habitat. 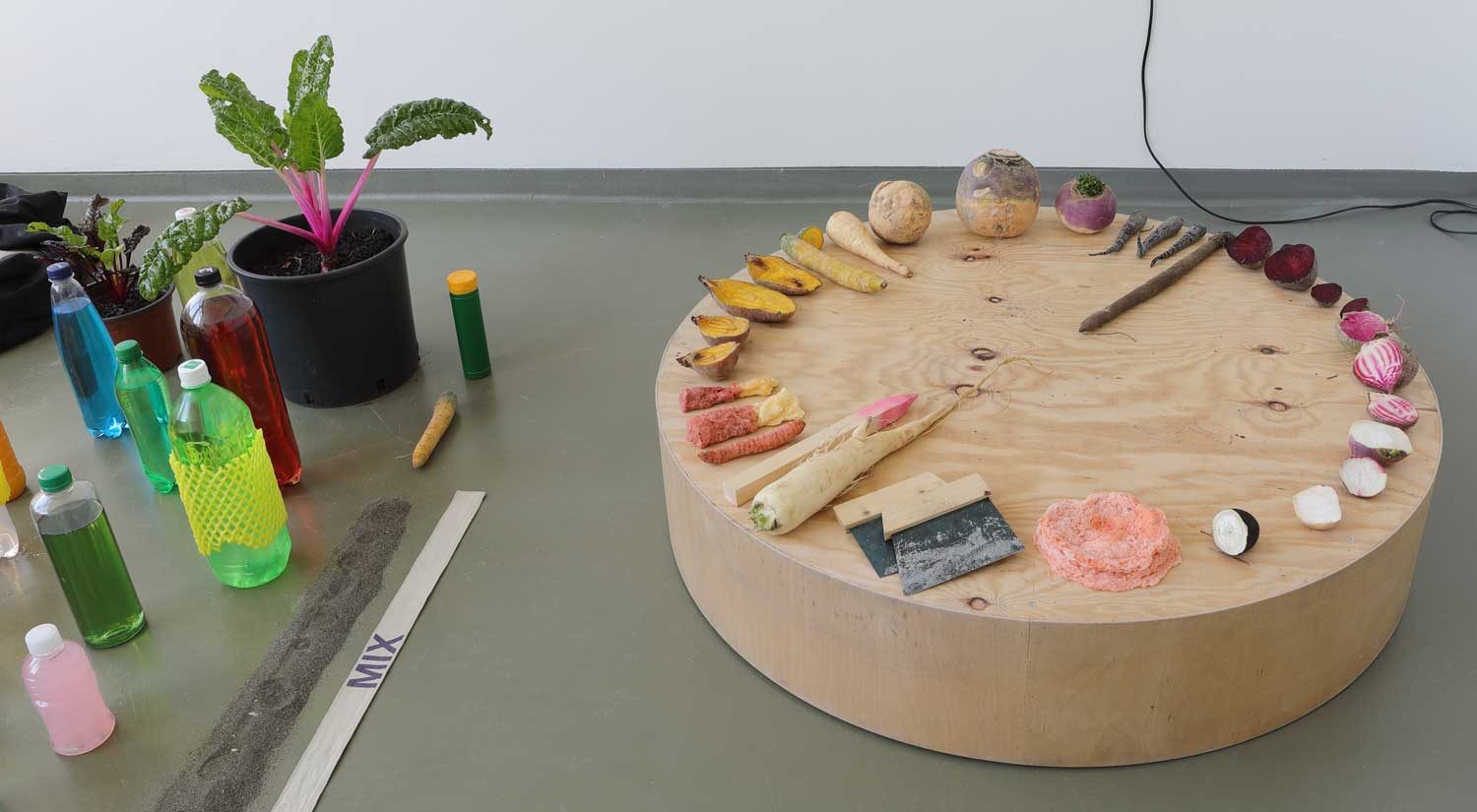 ‘In the main building, I end up in a talk by De Onkruidenier about the sugar beet, which has a precursor in the beach beet, a primordial plant that was resistant to salt water. De Onkruidenier has built a whole story around it and depicted it in a market display on the floor divided between two studios. The installation offers a combination of ecology and economy, with numerous playful moments of action, to make the transformation from seed to plant to yet another plant and food product (drink, sugar cube) optimally clear. A striking detail are the holes in the wall through which the artists involved play large assignments carved into wooden planks to each other. When I’m talking to one of the weedkeepers, a hand suddenly pokes through the wall and hands me something. After the explanation, I walk back to the other room to look at the so-called “pelleted” sugar beet seeds, which are industrially coated with a blue layer to make them easier to sow as grains. Like the beads of a bead necklace they lie in a petri dish.‘