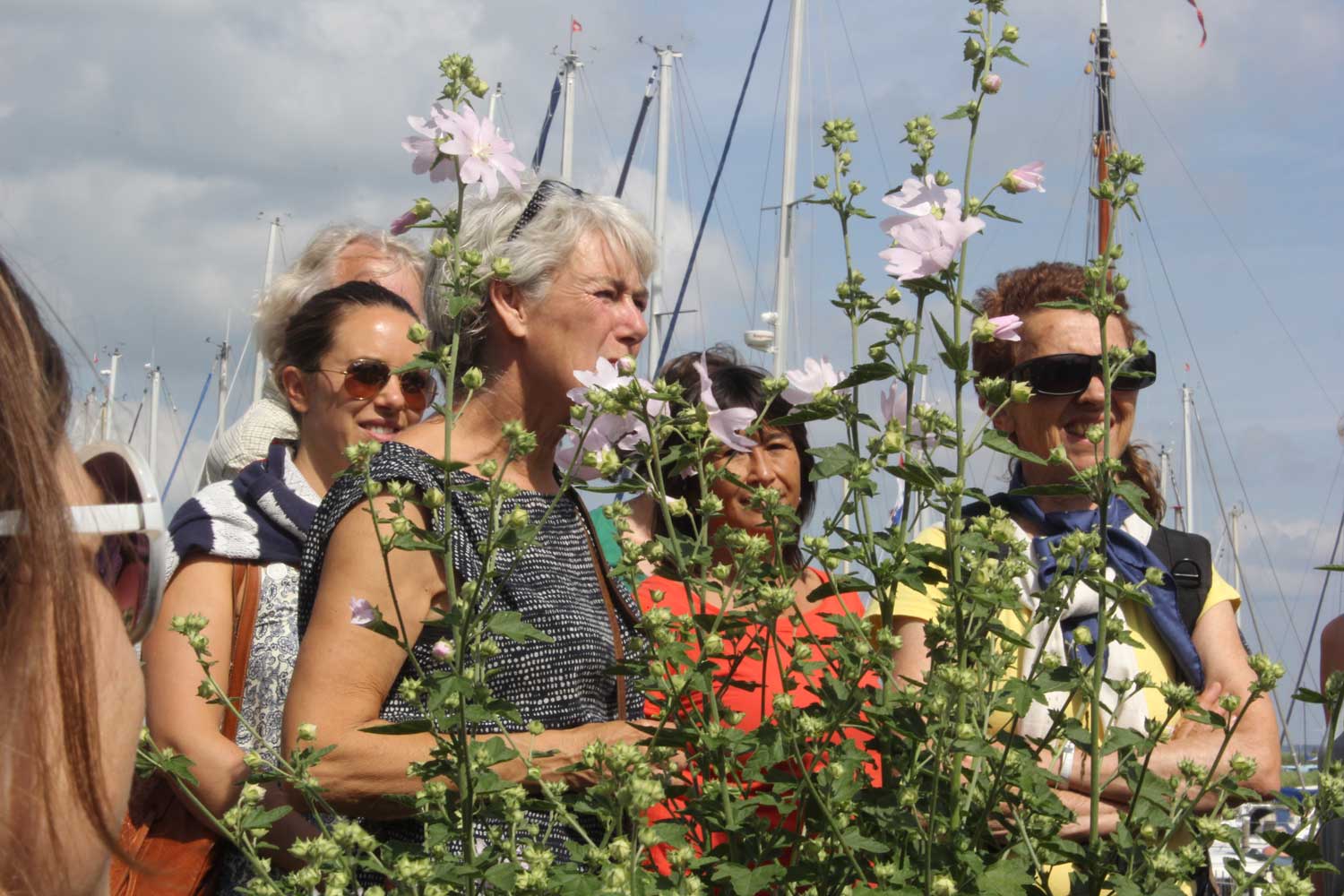 In 2016, it was exactly 100 years ago that a major dike breached in Amsterdam Noord and caused the peatlands of Waterland to flood. The 1916 flood stayed as an unnamed storm surge until a few years back, when in the commemorative year of 2016 it has been given the name ‘Waterlandse Vloed’. The Zuiderzee left a trail of destruction behind. Fields and meadows were under water for months. In order to find a tangible reminder of this flood in the Waterland landscape, the collective began a search for the salt of the flood. Can we still retrace the Zuiderzee salt of 100 years ago? And which salt-loving plants are possible indicators of salt still being present in this particular landscape?

To find salt-loving plant species we went on an expedition with scientist and biologist Claud Biemans along the Durgerdammerdijk in Amsterdam Noord. In the past Claud has done fieldwork counting plant species in this area for Floron and was happy to take us along for an walk. During our exploration with Claud we found a beautiful marshmallow near Durgerdammerdijk 114. How does this lost and lonely marshmallow get its amount of salinity it needs? And how remarkable that the plant knows how to survive on a tight green lawn on a slope? The location of our discovery gave reason for raise more questions than it provided answers.

This marshmallow plant became an important stop during our expeditions by bike in Waterland. The resident of the house at Durgerdammerdijk 114 became curious why we stopped at ‘her’ plant every time. Meeting this the lady of almost a hundred years old she explained that as long as she could remember she takes care of the marshmallow plant. She knows exactly when the mower of the municipality comes along and since many years she makes sure that the plant is not damaged. Because of this special bond between the marshmallow and this lady, we can still find the plant between the grass in the dike.

The salty influence of the sea extends so much further than we assumed. In the transition between water and land, freshwater and saltwater systems meet. Here it is brackish. The perfect habitat for the marshmallow, which loves to grow in brackish reed marshes. These brackish water systems are becoming extinct in the Dutch landscape; a hybrid ecology where the influence of the sea with its tides has been reduced to harsh boundaries of dikes, dams or flood barriers.

Observing at the appearance of marshmallow in the Netherlands, many are noted in Zeeland and along the coast. The marshmallow is an indicator of salinity being present in the soil. After the flood in Waterland, plants of marshmallow have also been found in Waterland. Especially along the old sea dike in Durgerdam and on the side of the Noordhollandsch Kanaal many specimens were found.

The marshmallow belongs to the mallow family. The flowers in this family are very recognizable, like hollyhocks.  The leaves are soft, hairy and have a green-gray glow. The plant grows bushy and reaches just over a meter in height with pink pale flowers.

Looking further into the origin of marshmallows took us back to the times of the Egyptians, who gathered the roots of the plant along the salty banks of the Nile.  The juice from the roots of the marshmallow was extracted by crushing them. Then the marshmallow root juice was mixed with egg whites and honey. The marshmallow acts as a binding agent but also promotes digestion by soothing our mucous membranes in the stomach and intestines.

Instructions:
1. Boil the water with sugar and glucose until the mixture is clear.
2. When the mixture is boiling, start beating the egg whites until nice stiff mounds form.
3. Keep whisking the egg whites well with a hand blender while adding the hot sugar water mixture and continue doing so until the mixture has cooled to body temperature.
4. Mix the marshmallow root powder with a small splash of water and stir well until a firm paste is formed.
5. Then mix the marshmallow root into the beaten egg white mixture.
6. Put the mixture in a piping bag.
7. Sprinkle a baking sheet mix a layer of icing sugar and cornstarch.
8. Then pipe small cushions of the mixture onto the baking sheet.
9. Allow the tufts to set for several hours.