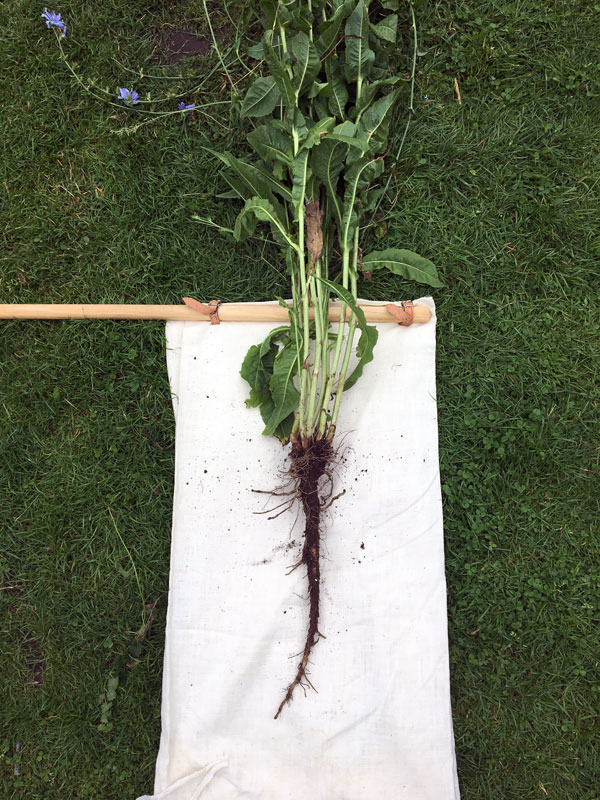 Roadsides is where you can come across the most valuable finds. If theses roadsides are not mowed too often, it is one of our favorite places to explore. Roadsides not only serve humans, but are also a route along which plants spread. A true roadside plant is the common chicory and local names in the Netherlands or Germany include ‘Wegenwachter’ (protector of the road). This popular name refers to the plant’s behavior of spreading in large numbers along roads. With its impressive clouds of bright blue flowers it truly is a feast for the eye.

Chicory has versatile uses and the entire plant is edible. The young leaves are useful in salad or as a stewed vegetable. The roots are a source of inulin, which is currently being researched as a substitute for granulated sugar. The roots can also be used to make coffee substitute and to grow chicory (Belgian endive). The blue flowers are edible and the buds can be pickled in a brine. The wild chicory (Cichorium intybus) has led to many cultivated varieties such as: coffee chicory, red chicory, chicory and endive.

Around 1770, the production of coffee surrogate in chicory factories started in Groningen. There were several chicory mills in the city that roasted and ground the roots into a dark brown powder. Throughout time chicory has been a plant to supplement or partially replace coffee in times of scarcity. At the time of World War II, many supplies of coffee and tea ran out. Thus, chicory enters the market in 1941 as a surrogate coffee. The product consisted mostly of barley to which a mixture of peas, field beans, chicory, acorns and tulip bulbs were added. As early as the 19th century, it was common in times of scarcity to mix real coffee with coffee substitute, often from chicory. This coffee was not pure and that is where the Dutch expression “dat is geen zuiver koffie” comes from and means something in along the lines of “there is something fishy about it.”

You can use the roots of the chicory to make your own coffee drink. To make this, you first dig out the thick roots. Rinse the root well, but you don’t need to peel them. Then you can chop the root into small pieces and let it dry at moderate heat. When dry you can roast the root pieces in the oven or in the pan. In a coffee bean grinder you can then grind the pieces of the root into a fine powder. To make the drink, put a teaspoon of ground carrot powder in a cup and pour boiling water on top of it.