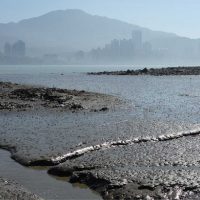 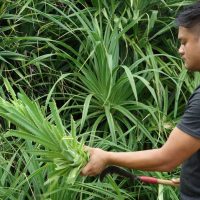 The sea is our refrigerator 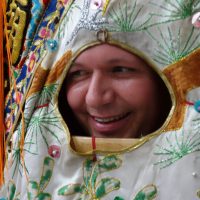 MAZU — goddess of the sea 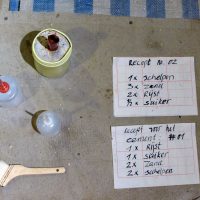 From September till December 2018 De ­Onkruidenier stayed as artist in residence in Taipei as part of an exchange ­program between the Jan van Eyck academie in the Netherlands and Bamboo Curtain Studio in Taiwan.

The landscape as a cultural mirror

The Chinese word for landscape consists of two characters that individually mean; river and mountain. Taipei city is situated along the Tamsui river and enclosed by mountains. It was already in the first week of our stay in Taipei, that the great ­supporting team of the Bamboo Curtain Studio connected us to environmental ­expert Mr. Brooke Chen, who prepared a two day field trip for us along the ­mangroves and riverbanks of the Tamsui river that connects Taipei to the South China sea. We took a ferry from Tamsui to the other side of the river, near Ba-Li. Halfway the little boat trip, Mr Chen showed us a copy of the very first map of Taipei and asked us if we could see the ­similarities between how the map was drawn and the landscape around the river.

The bridges, the residential tower buildings, the mountains that shape the city and the way the disconnectedness between the mountains and the river immediately stands out, caught our eye. Mr Chen pointed us at the ­legend in the upper left corner on the map. ‘You can read this’, he said with a big smile on his face. The map he showed us, is drawn in 1654 by the Dutch. For 38 years the Dutch colonized former Formosa. On the ­second day we made a walk along one of the old rivers you can clearly see on the old map. During the walk we compared the original location of the river with the ­current situation. An old sluice, built by the Dutch, still marks the presence of the Dutch in this area. We ended the two day field trip at the so called ‘Red hair castle’, named after the red haired Dutch occupiers. ­During this field trip it became clear for us that our research was going to have an important historical layer during the 3,5 months that followed.

It ­became clear that understanding the landscapes in relation to New Taipei City ­actually meant a confrontation with our own colonial history. Looking at the landscape through our own cultural lens, our own history looked back at us. For a moment the landscape became a mirror revealing a connection with the past.

Between 1624 and 1664, Taiwan has been an important location in the global trading network of the VOC, connecting Holland with Indonesia, The Philippines, China and Japan. To strengthen their position, the Dutch built several forts like the Red hair castle in Taipei and Fort Zeelandia in the South of Taiwan in Tainan. To build these forts, bricks supposedly were brought from the Netherlands and from Java to Taiwan. Chinese and Indonesian workers were brought by ship for the labour. The Dutch learned to make cement from Hakka Chinese by cooking glue from local glutinous rice and mix this with burnt oyster shells, river-sand and sugar, made from local sugar cane plantations.

From this point the tone of our work was set and it ­became very clear that the inclusion of the (Dutch) ­colonial past in our ­research was needed. How did the migration of plants, people, ­resource, ­animals ­alter the social and ­natural ecology of Taiwan? In order to ­understand this question we started to look further into the ­history of botany in Taiwan, the use of plants by ­ natives and the role of local resources to create cement.